Feel free to browse these Frequently Asked Questions about the basics of growing Haskap berries.

Feel free to post questions and one of the volunteer members will answer your question.

What Are Haskap Berries?

Haskap is the Japanese name for Lonicera caerulea, also known as Edible Blue Honeysuckle, Honeyberry and . Haskap is an ancient Japanese name of the Ainu people of Northern Japan for the fruit meaning “berry of long life and good vision”. The first introduction of the cultivated plant to Canada was at Beaver Lodge, AB in the 1950s. The fruit was bitter and not palatable. It has been found in the wild in every province in Canada except for British Columbia.

The name “Haskap” was chosen as the brand name that have been applied to new varieties bred by the Fruit Program at the University of Saskatchewan, Saskatoon, Saskatchewan, Canada.

Haskap berries come from varieties common to a circumpolar species native to northern boreal forests in Asia, Europe, and North America. It is mainly found in low lying wet areas or high in mountains, in a variety of soil and growing conditions.

Most people mistaken the fruit as part of the Vaccinium Family (Blueberries and cranberries), when in fact the fruit is just as closely related to tomatoes. It comes from the Dipsacales Order and is related to the Snowberry and Elderberry.

Haskap have their own unique taste, color and texture. They have very tiny seeds that can be eaten with the berry. The taste has been described as tart/sweet and juicy, like a raspberry. They have a powdery blue skin, like a blueberry but the skin is quite thin and melts in your mouth.

How do Haskap berries grow?

Haskap berries grow on bushes that form a globe shape and can grow 5-7 feet tall over 5-7 years.

It is one of the first fruit crops to set and ripen in the growing season (earlier than
strawberries by a few weeks) and continue to produce berries into the fall. Most
commercial harvesting occurs in the last weeks of June and into late July, depending on the geographical region.

What pests or problems are associated with Haskap?

Haskap have few known pests. By far, birds have been the most challenging as they will come in large flocks and decimate bushes ripe with berries. For orchard growers, bird sound / calling devices have been successful to keep small birds away. For gardeners and small orchards, netting and scarecrow type of set-ups are often necessary and have been used successfully.

Only current disease is Powdery Mildew, which tends to show up in the leaves after berry harvest

Check with your propagator supplier for recommendations of herbicides

Annual weeds do not suppress growth

Does not compete with grasses and weeds once established. Grass is good between rows.

Deer tend not to bother tree or buds

Mice, gophers and moles can be a problem

Where are Haskap grown?

The University of Saskatchewan varieties are winter cold hardy to -45C, and flowers have been known to survive and set fruit after withstanding -11C temperatures. Haskap is being planted across Canada, the United States, many eastern European Countries, Japan, Russia, Chile and Australia to name a few of the many countries becoming interested in the Haskap berry. Growers in Alaska, Yukon and the Northwest Territories find the Haskap varieties very suited to their short season with long daylight hours.

What is the plant structure?

The fruit is an oblong dusty electric-indigo coloured berry about 1 cm diameter and ranging from about 1 – 4 cm long.

What is a pollinator and why do Haskap need them?

All varieties of Haskap or edible blue honeyberry need a pollinizer type of berry bush in order to have optimum berry growth. As a general rule of thumb, you need one pollinizer plant for every 5 plants to be pollinated. It is best if the plants are planted side by side, but as long as bees can easily see both plants at the same time they are probably close enough. Picking a pollinizer plant can sometimes be a bit tricky as not all varieties of Haskap will pollinate each other. See this article by Dr. Bob Bors to learn more.

Haskap flowers are self-incompatible and a second compatible (pollinizer) plant is needed for fruit to produce from the flowers. Bees and insects carry the pollen from one flower to another.

As a general rule of thumb, you need one pollinizer plant for every 5 plants. It is best if the plants are planted side by side, but as long as bees can easily see both plants at the same time they are probably close enough.

What is pollination and why does it matter to Haskap berry production?

A pollenizer (or polleniser), sometimes pollinizer (or polliniser, see spelling differences) is a plant that provides pollen.

The word pollinator is often used when pollenizer is more precise. A pollinator is the biotic agent that moves the pollen, such as bees, moths, bats, and birds. Bees are thus often referred to as ‘pollinating insects’.

The verb form to pollenize is to be the source of pollen, or to be the sire of the next plant generation.

While some plants are capable of self-pollenization, pollenizer is more often used in pollination management for a plant that provides abundant, compatible, and viable pollen at the same flowering time as the pollinated plant. For example, most crabapple varieties are good pollenizers for any apple tree that blooms at the same time, and are often used in apple orchards for the purpose. Some apple cultivars produce very little pollen or pollen that is sterile or incompatible with other apple varieties. These are poor pollenizers.

A pollenizer can also be the male plant in dioecious species (where entire plants are of a single sex), such as with kiwifruit or holly.

Nursery catalogs often specify that a cultivar should be planted as a “pollinator” for another cultivar, when they actually should be referring to it as a pollenizer. Strictly, a plant can only be a pollinator when it is self-fertile and it physically pollinates itself without the aid of an external pollinator. https://en.wikipedia.org/wiki/Pollenizer

A pollinator is an animal that moves pollen from the male anther of a flower to the female stigma of a flower. This helps to bring about fertilization of the ovules in the flower by the male gametes from the pollen grains.

A pollinator is different from a pollenizer, a plant that is a source of pollen for the pollination process. https://en.wikipedia.org/wiki/Pollinator

What Haskap varieties are pollinizers? 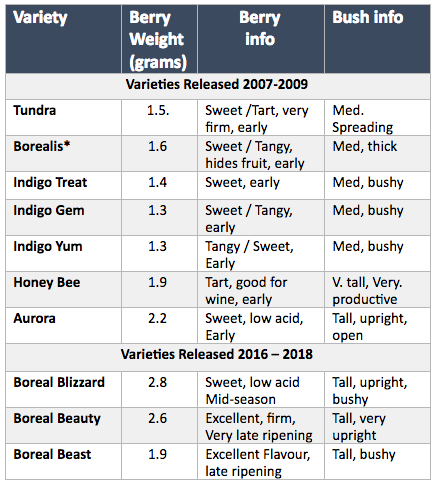 Currently, there are 9 varieties being branded as Haskap in Canada. All of these varieties have come from the University of Saskatchewan Fruit Breeding Program. The following is a chart that shows the pollination combinations of Haskap varieties. 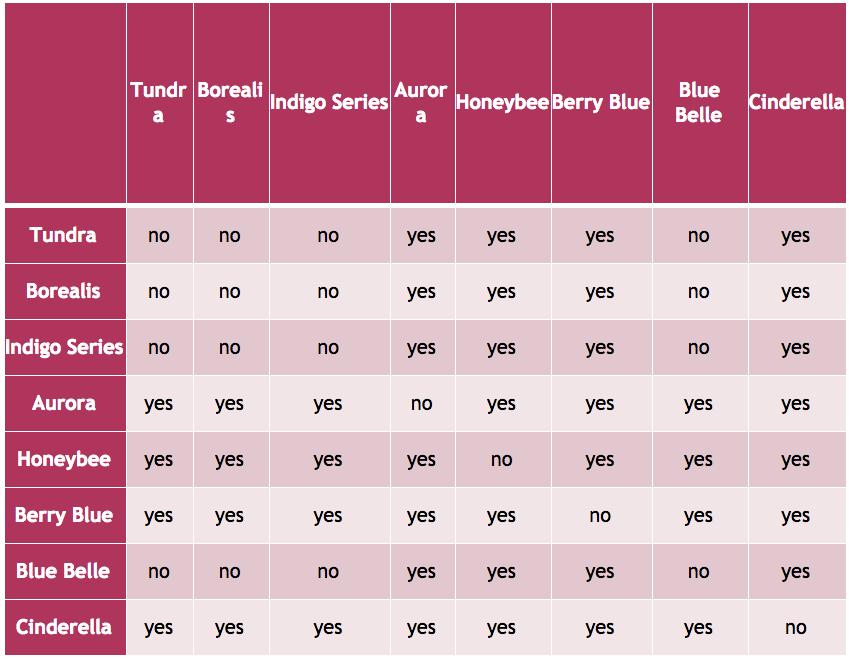 How are the different varieties described?

The Indigo series varieties were initially released for testing alongside ‘Borealis’ and ‘Tundra’ with the numeric labels shown.

Was released by University of Saskatchewan but difficult to propagate

The University of Saskatchewan has announced the release of new Haskap selections. Larger in size and mid-to-late season, these berries can hold the potential for bountiful fruit production throughout the summer. These new varieties will be available in the following years.

How many varieties of Haskap are there?

The varieties developed by the University of Saskatchewan are listed on their website. http://www.fruit.usask.ca/haskap.html

Varieties have also been developed by other regions of Canada, European countries and Asian countries

There are some older Russian varieties also available. These were introduced to North America by Jim Gilbert in the 1990s

The fruit from these varieties are generally smaller and tarter but the plants are vigorous growers and high producers. Some names include:

How do Haskap grow?

How are the bushes planted?

What kind of harvesters are used to pick Haskap berries?

Over the Row Harvester

How are Haskap bushes pruned?

What kind of Haskap products are there? 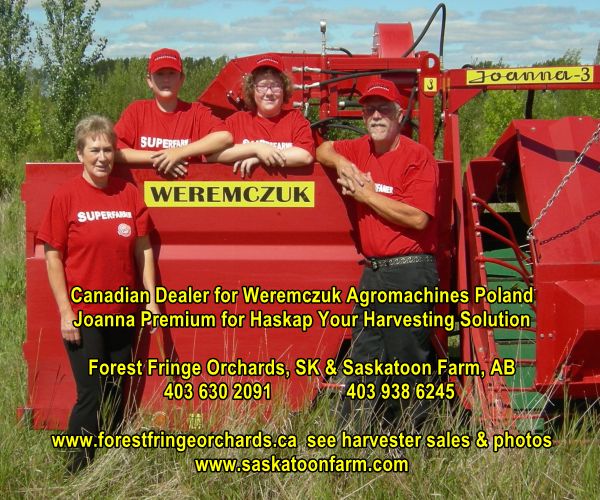